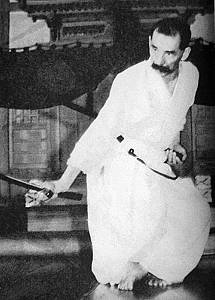 Saturday’s practice was pretty good. There was a local festival in town with fireworks, so there were fewer people at the dojo and that gave us all a bit more space to practice in. It’s kind of scary sometimes to have so many people in such a small space, everyone swinging a katana.

Now that testing is over until March, we have started to focus again on the koryu katas. I started with the shoden katas and went through them man-to-man with my sensei.

For my 4dan test, I had to do 4 seitei katas (that the judges decided on that day) and one koryu kata of my choosing. I chose #5 Inyoshintai as my kata. If you want to see videos of any of these katas, click the link to the right labelled Kata Videos.

I really enjoy doing the koryu katas. They have a different feel to them then the seitei katas, and though similar in technique (seitei was originally derived from various koryu katas) have some very different situations and movements.

The chuden katas are also very interesting, and I especially like Ukigumo where you are sitting side by side with your opponent, and he reaches for your katana. You pull away, block, and then cut him front to backwards. The picture above is of that kata. I know it sounds gruesome, but that’s what the katas are all about. It’s the mindset you have while doing the katas that is important and the key to iaido.
More on that next time.